With regard to planning for patient flow and physical distancing in your office, here is an excerpt from the recommendations:

 Develop an action plan for your staff before you open your doors for both routine and emergency care.  Effective intra-office communication can  help to your staff route and prioritize those patients who require urgent or emergent care, those with original appointments and those patients who need to be rescheduled.

 Instruct patients that companions should remain outside of the facility and not accompany the patient into the facility unless they are a parent/guardian of the patient or if they are a true caregiver and need to assist the patient.  Comlite allows for communication from the operatory to the front desk to pass information to a parent, family member or caregiver in the waiting area.

The ADA Task Force was convened to advise in the development of tools to support dentists who are returning to work after the COVID-19 closures and practice restrictions. Here are some ADA guidelines for a “Chairside Checklist” where Comlite can help with compliance:

 Keep staff level in operatory to the minimum required.

 Cover keyboard of computer with disposable, flexible, clear barrier (e.g. plastic wrap) and change between
patients. This is a good practice to adhere to Covid-19 and beyond.

WALKING A FINE LINE TOWARD EFFICIENCY

By using technology to our advantage, we can see more patients without sacrificing care.

Many of us find ourselves walking a fine line as far as how many patients we see each day and for how long. Consider: To compensate for reduced reimbursements from managed-care plans, we want to be more efficient so that we can see more patients to make up for lost revenues. Also, I’ve found that many of my patients, who have busy schedules themselves, don’t want to be in the office for more than one hour. But, if you trim the exam time too much, patients may start to feel as though they aren’t getting the care they deserve.

My associates and I try to perform 18 complete exams a day as well as see patients whose visit is for a specific issue or a contact lens check. That means we had to become more efficient. Fortunately, technology has enabled us to do so in several ways.

PAGING SYSTEM
We use the Optometry/Ophthalmology Office Paging Software from Comlite Systems, which tells us where patients are and which room the doctor needs to go to next. 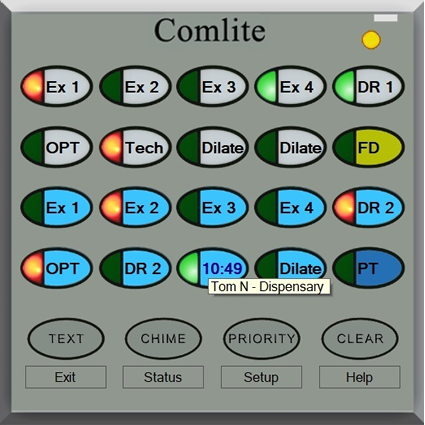 The Comlite software uses light buttons and audible chimes to show which exam room patients are in and what tasks need to be done. The Comlite system lets you view eight messages at a glance, and dropdown messages are available. In the image shown above, for example, the screen to the left shows that doctor 1 (the white DR 1 button) has a patient waiting up front, is in exam room 1 (the red light on the Ex 1 button) and has a patient waiting in exam room 4 (the green light on the Ex 4 button). Doctor 1 has paged a tech to exam room (the red light on the white tech button).

Sharokh Kapadia, OD, FAAO, graduated from Michigan College of Optometry and did a residency in ocular disease at Bascom Palmer Eye Institute. He is in private practice in the Greater Jacksonville, FL, area.

Windows 10 update should be avoided until Microsoft delivers fixes

After consumers reported a number of problems with the latest major update to Windows 10, Microsoft responded by preventing the October 2018 Update from being installed on some systems. Microsoft announced that the Windows 10 October 2018 Update was available for download when it announced its new Surface Pro 6, Surface Laptop 2, and Surface Studio 2 at a media event on October 2 in New York City. Since then, users have reported a number of wide-ranging issues caused by the update, including lost files, issues with CPU usage, and reduced battery life post-update.

The problem with disappearing files has been widely reported on various social media forums, including on Reddit and Twitter, with one user reporting on Microsoft’s community forum that he had lost up to 220GB of data after the update. Affected file types include documents, music, and photos. “I have just updated my windows using the October update (10, version 1809) it deleted all my files of 23 years in amount of 220gb,” forum member Robert wrote. “This is unbelievable, I have been using Microsoft products since 1995 and nothing like that ever happened to me.”

This problem may be caused by OneDrive. Twitter user @coolkevinator noted that if you have locally stored items that aren’t also saved to OneDrive, the Windows 10 update will wipe out the files stored on your computer. “Heads up to anyone updating windows,” the tweet said. “Apparently, if you have documents saved in your user directory, i.e. users/JohnDoe, and not one drive, the update will delete EVERYTHING in that location. So if your ‘Documents’ or ‘Pictures’ don’t have a one drive symbol, MIGRATE IMMEDIATELY!”

According to MSPowerUser, rolling back the install the previous version of Windows 10 does not bring back the files. If you’re updating to the October 2018 Update, be sure to backup your file to an external drive, OneDrive, or another cloud storage service in case of data loss.

Another issue caused by the update relates to the Intel Display Audio driver. This glitch affects users running PCs with Intel’s 6th-Generation Skylake processors or newer. Users reported excessive CPU usage, which will lead to diminished battery life. Microsoft and Intel both acknowledged the issue, and Microsoft has halted the update to affected systems. “To ensure a seamless experience, we are blocking devices from being offered Windows 10 version 1809, until updated Intel device drivers are installed on your current operating system,” Microsoft said on its support page. “We recommend that you do not attempt to manually update to Windows 10, version 1809, using the Update Now button or the Media Creation Tool from the Microsoft Software Download Center until newer Intel device drivers are available with the update.”If your system is affected, you can manually download the Intel Graphics Driver prior to downloading the Windows 10 update. This driver also contains the fix for the Intel Display Audio driver glitch.

Although the October 2018 Update is available now, it’s not an automatic process yet. You can manually check for the update by going to Settings, Windows Update, and then Check for Updates. The update should automatically download for all users starting October 9.

For now, users should hold off on updating their Windows 10 PC until Microsoft addresses all the early complaints from the download. If you must download the October 2018 Update, we highly recommend that you back up all your files and install the Intel Graphics Driver before proceeding.

Timing Analytics for Procedures and Tasks

Some common tasks and procedures include:

Average time for doctors and staff to respond to a page

Knowing these averages will result in “found- time” and increase office exam time, productivity and profits!

WHERE IS EVERYBODY? HOW DO YOU MANAGE OFFICE WORK-FLOW ONCE YOUR DAY STARTS?

When it comes to having an efficient practice, staff communications are critical to maximizing your productivity. The ability to know what is going on throughout the office makes it easier for everyone on the staff to coordinate patient treatment and minimize interruptions. Discrete communications allow team members to get the doctors attention without knocking on a door, using an intercom, talking over them or worse, “Yelling Down the Hall.” Having effective communications can eliminate any potential interference with patient consultations.

Building and maintaining patient relationships is an important part of building a profitable practice. When you view your team’s communications from a holistic perspective rather than a series of individual pages or notifications your whole team will have a real-time snap-shot of what is happening throughout the office. Doctors will know how long hygiene has been waiting on a check, who was ready first and when their next patient has checked in and is waiting. Hygienists will know when the doctor can’t come for a check right away, so they can then give extra attention to the patient they are with.

Whether it’s getting a timely notification when patients are unable to keep an appointment or knowing that the doctor will be delayed in coming for an exam, knowing where everyone is, what stage of treatment they are at, and how long they have been waiting keeps your patient wait times at a minimum and reduces the daily stress of trying to keep up with a schedule that can change at any minute.

Comlite provides a light-signaling/paging and texting software that enables dentists to page assistants and staff to rooms, be notified when hygiene is ready for an exam, be notified of patient arrivals and know about schedule changes or cancellations as they occur. It is a non-intrusive visual interface that provides all this information at a glance on every computer desktop in the office. 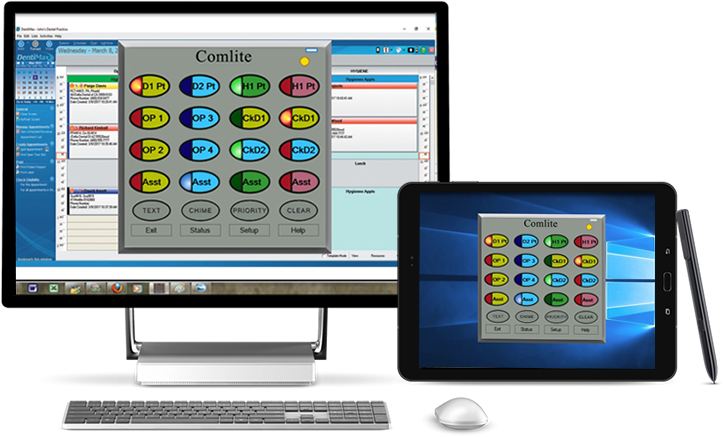 Before any of the tech jargon, design chops, or programming skills related to making a website come into play, your site has to take shape as a solid idea. Having a clear understanding of your site’s mission will help inform your design, content, and structural choices later on, so step one is to get that mission nailed down…

With the conversion to the ICD-10 Code set on October 1, 2015, you can expect reduced capacity and efficiency in your practice as noted by other practitioners around the world. Improving communications, gaining efficiency, and increasing capacity will help you reduce the potentially negative impact of ICD-10 on your patient flow and cash flow.

The Comlite LAN4000 is a tool that can improve doctor-staff communications and efficiency. Running on your network, the LAN4000 is easy to install with either wireless or wired connection.

And, the Comlite LAN4000 timing functions report productivity and performance for doctors and staff so you can constantly improve your performance.

Behind the Scenes of a Successful Dental Practice

Ever wonder what makes one dental practice more successful than another?   Is it location, marketing, advertising?   Ultimately, what keeps patients coming back is the people in the practice and the overall patient experience.   Sometimes it’s the little things such as office efficiency.  Having a seamless, invisible intra-office communication system between doctors and staff is one way to provide better service to your patients.  The Comlite LAN4000 light-signaling and texting software lets you multi-task staff communications with patient treatment in a discreet fashion. It will save the doctor and staff a lot of steps in the office while providing a centralized communication center.